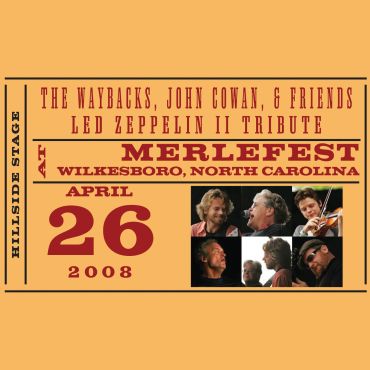 $15.00 CD OUT OF STOCK $10.00 Purchase DOWNLOAD
01. Whole Lotta Love
Purchase
02. What Is And What Should Never Be
Purchase
03. The Lemon Song
Purchase
04. Thank You
Purchase
05. Heartbreaker
Purchase
06. Living Living Maid (She's Just A Woman)
Purchase
07. Ramble On
Purchase
08. Moby Dick
Purchase
09. Bring It On Home
Purchase
"Festival regulars know never to miss The Waybacks. An exciting newgrass band from San Francisco, they are full of surprises. Saturday on the Hillside Stage was billed as "Album Hour with The Waybacks, John Cowan and Friends." Rumors flew around the festival as to what it could be, but were quickly put to rest when Cowan sang the opening notes of "Whole Lotta Love" from Led Zeppelin II. The ensemble proceeded to play the entire album start-to-finish. Rather than a bluegrass version of the album, the group went all out. Lead guitarist James Nash rocked every solo note-for-note, switching his guitar between acoustic and electric settings. It was great to hear the familiar riffs being played on fiddle and banjo as well (by none other than "Dr. Banjo" himself, Pete Wernick). During "Thank You," the delicate keyboard part at the end sounded ethereal and transcendent on a mandolin. Cowan's high range and falsetto were a perfect fit for Robert Plant's vocals. The band was complimented by Wilders fiddle player Betse Ellis and Byron House on keys. "Heartbreaker" and "Moby Dick" were particularly fierce with twin fiddles and Nash rocking out with fully distorted guitar. It was one of the best sets of the entire festival" - JamBase